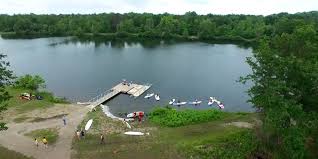 Wiregrass Lake is a very poor bass fishing lake for multiple reasons. It’s a new metropark that opened in spring of 2015. Unfortunately, when they first opened it to the public, they hadn’t set very strict limits on fishing and anglers were taking out bucket loads of fish. The lake has been nearly completely fished out. Using our castable sonar, we have not been able to detect fish anywhere in the lake other than tiny little bluegill and panfish near shore and around the dock.

Wiregrass Lake can be found Here on Google Maps.

Wiregrass used to be privately owned and was a mecca for bass and bluegill fishing. The owner let a few people fish, and it was primarily small groups and catch and release only.

In the summer of 2015, it was opened to the public, and the lake was fished out completely in the first month.

The ODNR realized this problem too late after multiple complaints and reports of people taking home bucket loads of fish and have since restocked the lake.

You can catch very small bluegill and baby bass at this time. They stocked it with both of those as well as a few other panfish and some catfish. It may take 4-5 years before the bass are large enough to keep or be worth fishing.

We’ve fished there numerous times since it was restocked in the summer of 2016, and you will not catch any bass. Plenty of 3-4 inch bluegill can be caught though with bobbers, small hooks, and worms.

The park was designed to mainly be a kayaking lake. It has a nice kayak dock and boat ramp that even allows for wheelchair bound persons to get into and out of a kayak.

In the evenings the dock has lots of parents with their young children fishing around the dock.

If you want to catch bass, we suggest you skip this lake until maybe the year 2020. Sad. But true.

Over 40 years of fishing experience in Northwest Ohio, Southeast Michigan, and Northeast Indiana!